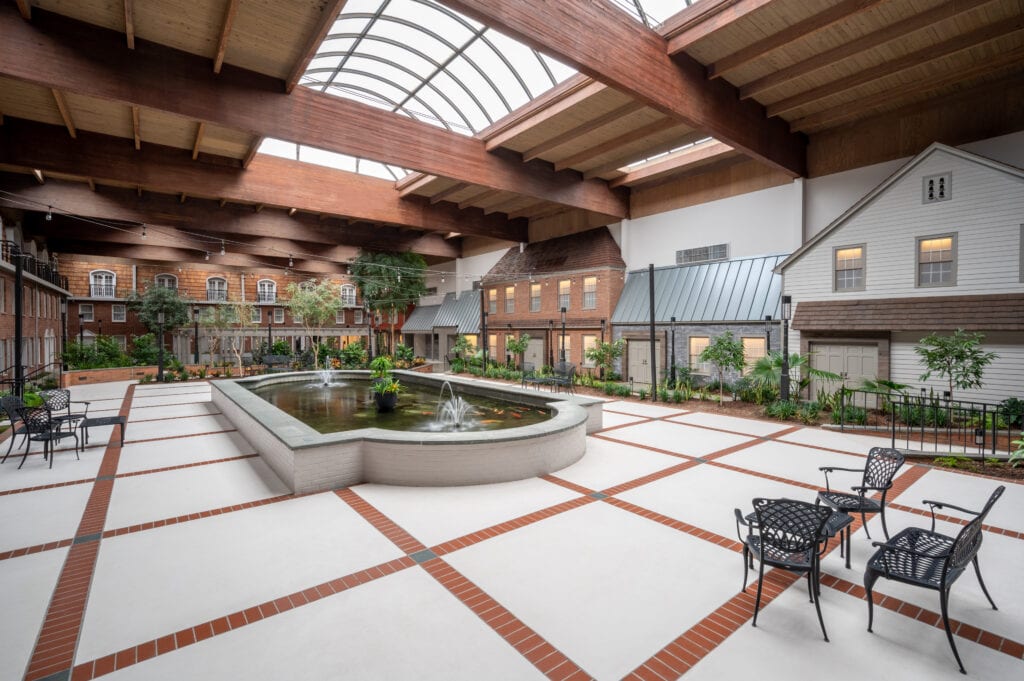 History of the Hotel – About Us

Crowne Plaza® Albany – The Desmond Hotel has been a family-owned and operated business since 1974. It remains one of a few privately owned and independently managed hotels in the Capital Region. Priding itself on outstanding hospitality, award-winning food and unique accommodations – the Desmond family considers its customer service among the utmost importance.

Early 1970’s – Philadelphia native John K. Desmond, Jr. visited Albany for business and realized there was a need for a premier hotel in the area. While driving on Wolf Rd, which at that time was still mostly farms, Mr. Desmond could not locate a hotel for the evening, and noticed there was prime land available near the Albany Airport.

1974 – Originally named The Americana Inn, the new hotel was a joint enterprise between John K. Desmond, Jr. and American Airlines as part of their “Americana Hotels” division. The hotel featured 183 guest rooms, a large unique indoor courtyard area called the Village Green, restaurants the Green Tree Coffee House and the Tavern-on-the-Green, and a bar the Patroon Tavern. One year later in 1975, American Airlines departed the hotel business nationwide to focus on their growing air service.

1979 – Recognizing the growing sophistication of its dining clientele and the need for a true upscale restaurant, management responded with the creation of the elegant Scrimshaw and renamed the bar Scrimshaw Tavern.

1982 – Keeping pace with the continual growth of the Capital Region, the hotel was enlarged to feature 140 more guest rooms along with King Street Ballroom and Courtyard, High Street Conference Center, Town Hall Amphitheater, The Lodge, and Health Club. This addition brought the hotel to the size it is today, with 323 guest rooms and almost 30,000 sq ft of banquet space. It was also at this time that the coffee house restaurant was renovated and became Simpson’s Grille. The original courtyard was also renamed Fort Orange Square, in recognition of the historical Albany area.

1984 – In celebration of the hotel’s 10th anniversary, the property was renamed The Desmond Americana to better reflect the Desmond family’s on-site presence and commitment to the area.

1992 – To highlight the importance of the conference and convention business, the hotel rebranded itself The Desmond Hotel & Conference Center.

2018 – In January the hotel joined IHG (InterContinental Hotel Groups) as an unbranded affiliate property The Desmond Hotel Albany, a decision made due to the increase in new hotels being built in the Capital Region and the growing demand from customers looking for a recognizable brand name with a worldwide loyalty program.

2021 – The property completed a large two year renovation project, and on April 15 became an official Crowne Plaza branded hotel within IHG (InterContinental Hotel Groups) with the new name of  Crowne Plaza Albany – The Desmond Hotel.  The renovations included the remodeling of all 322 guest rooms, an enlarged 24-hour Fitness Center, a new dedicated High Street Boardroom, and the addition of signature Crowne Plaza amenities such as the Plaza Workspace, Studio meeting room and lobby Marketplace.  It was also at this time that the restaurant and bar areas were completely renovated and rebranded as Mr. D’s Restaurant & Lounge, in honor of our original 40 year hotel owner – John K. Desmond, Jr.  Today the property continues to be independently owned, managed and operated as an independent IHG franchise currently managed by the third generation of the Desmond family, General Manager Tyler Desmond.

Our Commitment to the Community

As a family operated business for over 45 years, the hotel has a long and continuing commitment of actively supporting our local community through both monetary contributions, and donations of time and services. We are proud of our history of dedication to a wide array of charitable organizations as well as supporting our arts community, local colleges, athletic programs, and various other outreach programs.

Design of the Hotel

First time guests of the hotel often comment upon our unique design and beautiful indoor courtyards.  Much of the architecture throughout the property was designed by the original 40 year owner John K. Desmond, Jr. himself, who was a native Philadelphian with a passion for design. The interior of the hotel was originally modeled after a unique village square complete with mock homefronts, brick pathways, fountains and balconies. There have been many renovations and updates to the building since it’s beginning in 1974, but they all stay true to Mr. Desmond’s original upscale design.