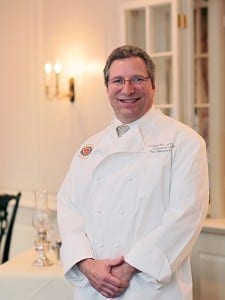 Chef Michael St. John began his career at The Americana Inn in 1981 (the hotel’s original name) as a line cook for Scrimshaw, and has held the title of Executive Chef since 1983. He received his Food & Beverage Manager certification from Cornell University in 1996, and has been awarded the prestigious designation of Certified Executive Chef by the American Culinary Federation.

In his position as Executive Chef, C.E.C. Michael is responsible for the staff development and menu design of the hotel restaurant and bar Mr. D’s, as well as all event food and beverage operations at the hotel for weddings, conferences and business meetings.

A point of pride for Chef St. John’s team was the recognition of the fine dining Scrimshaw restaurant with the prestigious AAA Four Diamond Rating for five consecutive years, 2010 through 2014, before it’s closure in 2015.  Michael also takes great interest in the development of young adults pursuing careers in culinary arts. He has mentored many students from area colleges including Paul Smith’s and Schenectady County Community College, and has recruited and trained members of the community for work in the culinary field through organizations such as Job Corps.

A lifelong area resident, Chef Michael resides with his family in Loudonville.